The Power of Positivity 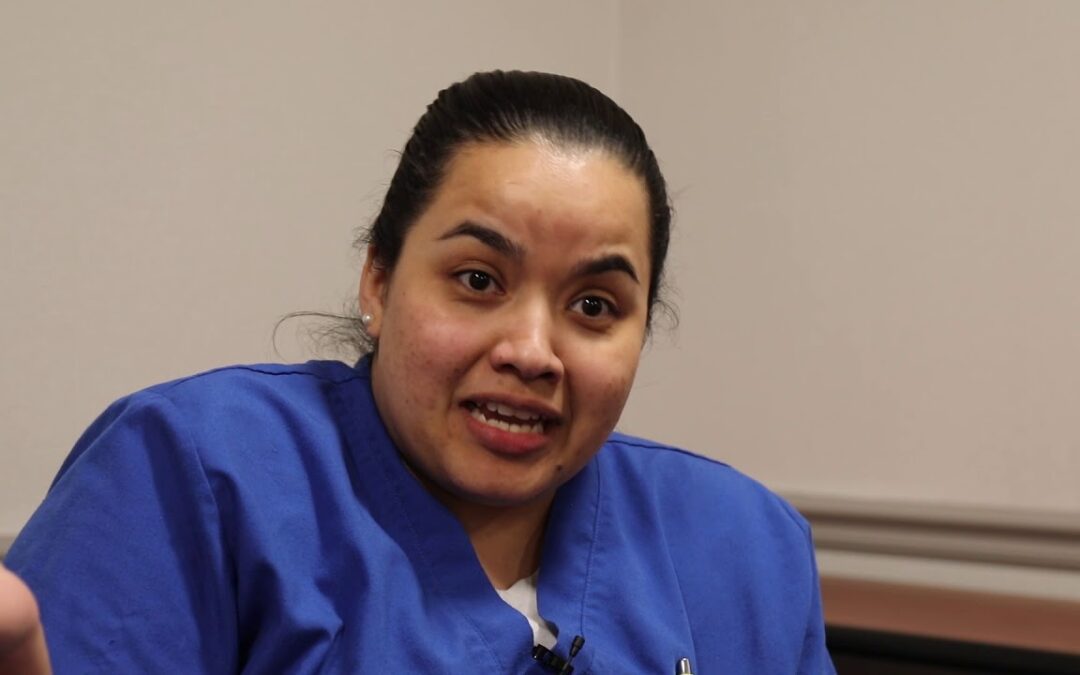 The Summer 2019 IAM Journal will be hitting the doorsteps on IAM members by late May. Here’s a first look at one of several articles in this edition. 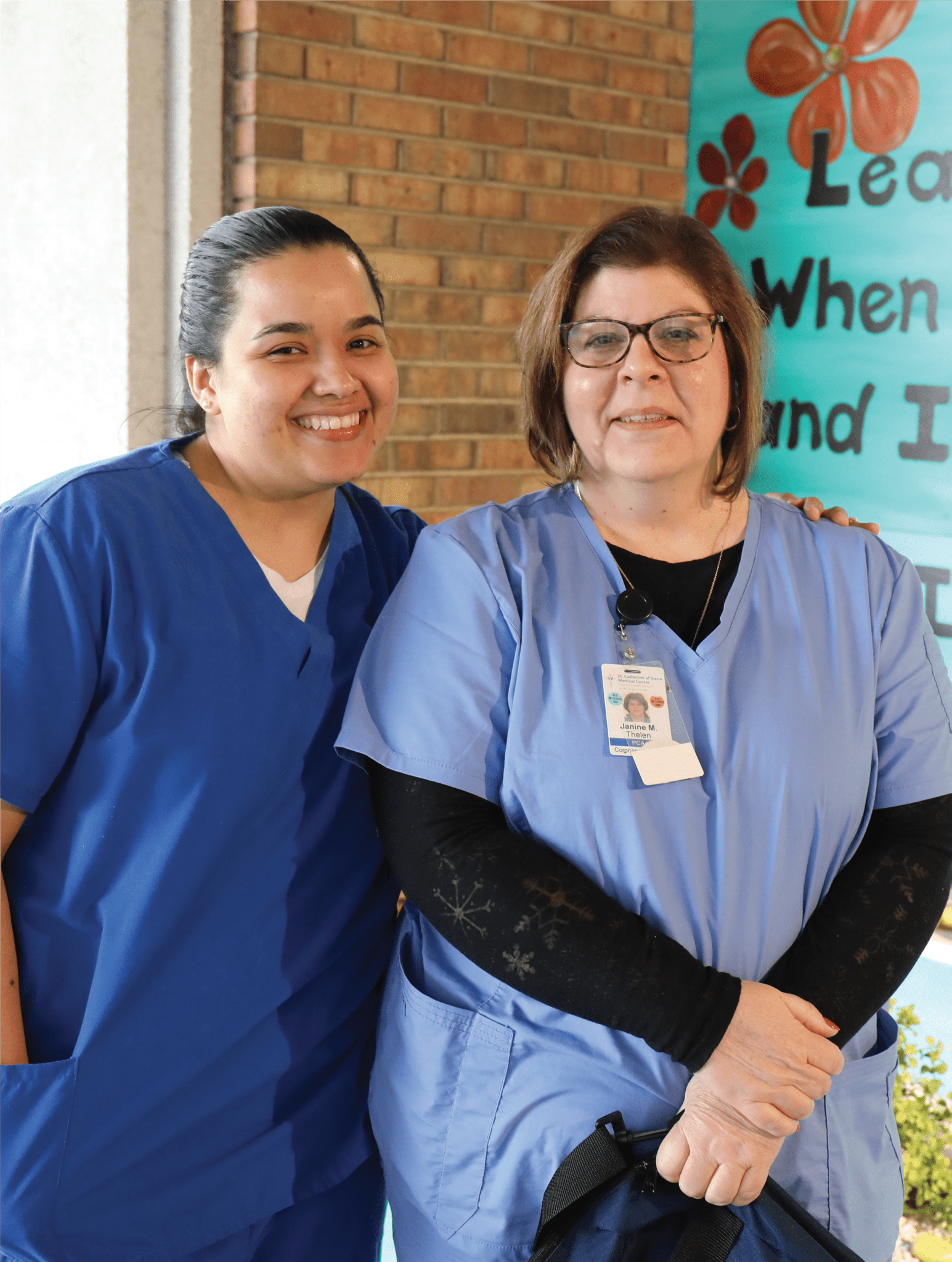 Rarely in the labor movement today is there an opportunity for a union to charter a new local lodge, especially one with 2,400 members. Last year the Machinists Union did just that when it welcomed Toronto Local 1231 into the IAM family.

Its membership is comprised of personal support workers who individually travel throughout the greater Toronto area to assist homebound clients with various daily activities.

“Working in the community, you may occasionally pass someone in the street, but you really don’t know who your coworkers are,” said Local 1231 Recording Secretary Henry Meeboer.

By joining the IAM they no longer have to feel alone. As part of their union benefits, a group of the new leaders attended training at the union’s Winpisinger Center in Hollywood, MD.

“I’m learning so much. I can’t wait to get back home and put it to work,” said Local 1231 Shop Steward Rootisha Rampat. “Now when we talk, we know the union is there to back us up.”

Thanks to IAM representation, these workers have a unified voice on the job like never before. They are also part of a growing group of IAM healthcare workers across North America who together are taking on dramatic changes in their industry.

“Healthcare has become more corporatized in the last decade or so, and there are interests who want to put profit over patients,” said IAM Healthcare Department Director Marti Garza. “Ninety percent of the workers in this industry are unorganized. They deserve a voice on the job, and the IAM is in the position to bring them together.”

The Machinists Union is dedicated to improving the lives of all healthcare workers. Many IAM members currently work in hospitals, veteran facilities, private patient care and patient transportation. In 2018 the IAM Healthcare Department was created to better serve these members, and find new ways to organize this sector of the workforce. 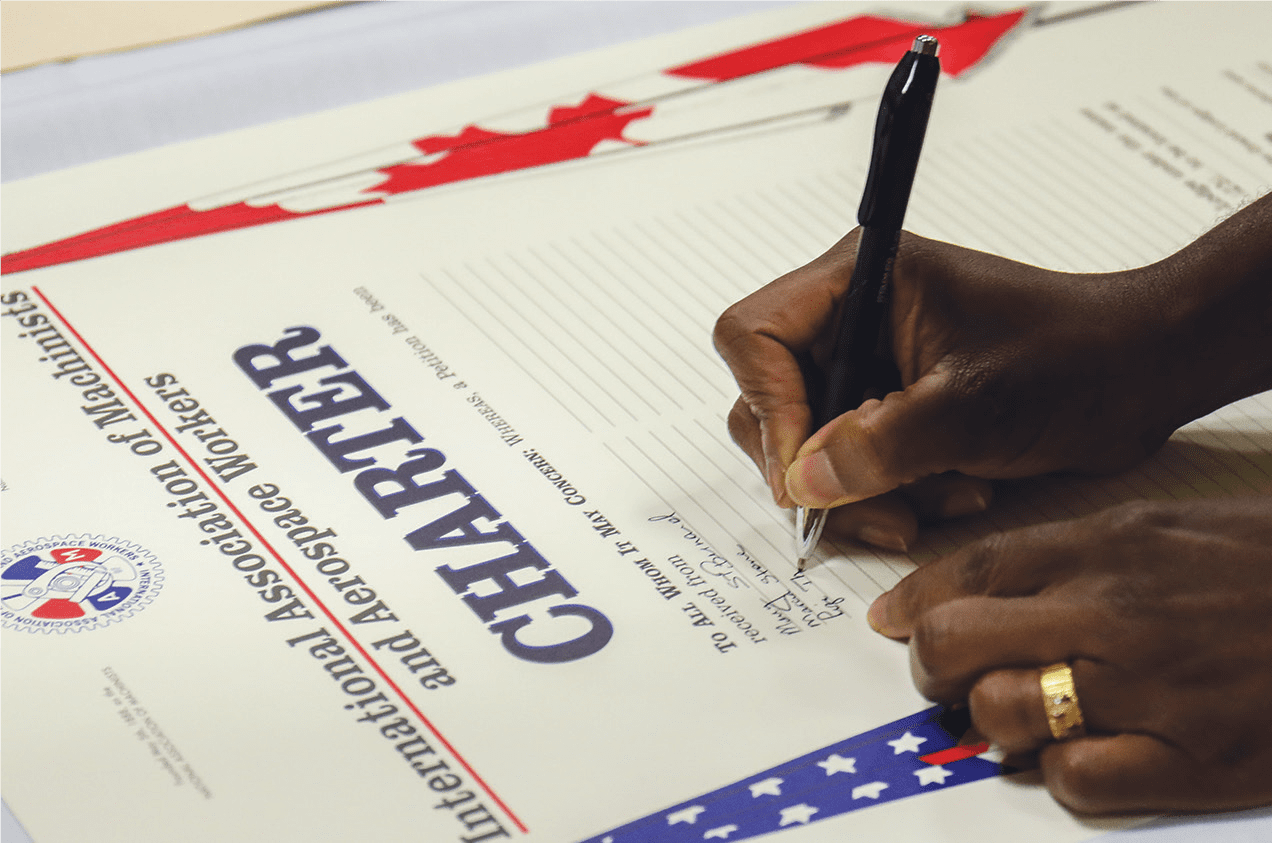 “The Machinists have a reputation as a fighting union, and we represent nearly 10,000 men and women in this industry now,” said Garza. “Healthcare in general is a big issue, and I think with that presence, our brand and our advocacy for veterans and working people, we can be a strong voice.”

On Long Island in Smithtown, NY, more than 400 IAM Local 434 members at St. Catherine of Siena Hospital have benefited from a union contract for more than two decades.

“People in healthcare sometimes are intimidated by management,” said Personal Care Attendant (PCA) and IAM Local 434 President Bill Katala. “By having a bargaining unit where you have the grievance procedure, or you have some way to protect yourself in a situation with a disciplinary action, it’s definitely beneficial.”

The local represents workers in 40 different job classifications at the hospital, including PCAs, pharmacy technicians, engineering, clerical and housekeeping.

“Some people say, ‘It’s just cleaning,’ but this is healthcare. Two things are very important, patient care and having a clean environment,” said Local 434 Housekeeping Chief Steward Vivian Bermudez. “The cleaning protocols and chemicals are very important for whatever the patient might have, whether he’s contagious or not. You have to make sure that you eliminate that before you put another patient in.” 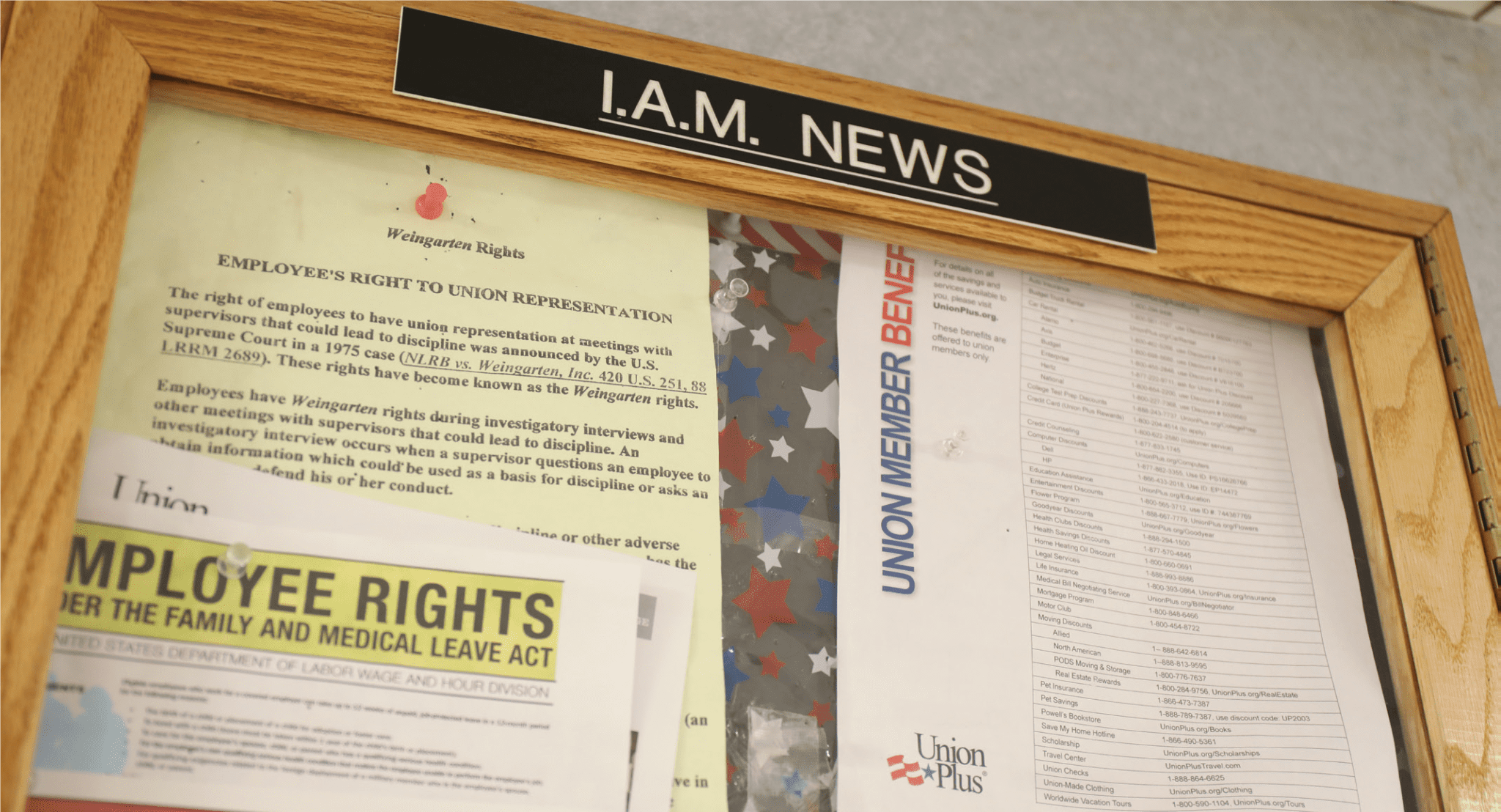 Working around contagions and potentially dangerous chemicals makes the safety of the housekeeping staff another important concern. Bermudez previously worked as a teacher and then as an EMT, both without the protections of a contract. This is her first union job.

“Now that I’m involved and understand what it does for you, it boggles my mind,” said Bermudez. “I’m not from this country. I speak a different language. I look different. You wouldn’t think that that matters, but it does matter. And that’s why the union is there to help you out with that.”

Most of her coworkers in the housekeeping department are Spanish-speaking women who never felt comfortable speaking up. They welcomed someone to whom they could relate when Bermudez stepped up as their steward.

Thelen had no previous union background either. She grew up in a staunchly non-union household where her father was a CEO. With Katala’s coaxing, she was convinced to step up in the local. Today, her family is proud of how she puts up a fight for working people.

“After my first bout with cancer, I became an unintentional insurance expert and on FMLA,” said Thelen. “If it wasn’t for union negotiation, we might not have had that great insurance for me to go to Sloan Kettering Cancer Center. And maybe I wouldn’t be here, because I got it again two years later.”

Since entering a leadership position, Thelen has assumed more and more responsibilities in her local, and in District 15. Anyone who meets her quickly learns that organizing is now a passion.

“I think unions should be the voice for somebody who does not have a voice in their own future,” said Thelen. “We need to reproduce unions. We need to build them and strengthen them, not only on Long Island but everywhere.”

As Bill Katala approaches the end of his working career, he wants those coming up behind him to clearly understand the value of IAM representation. 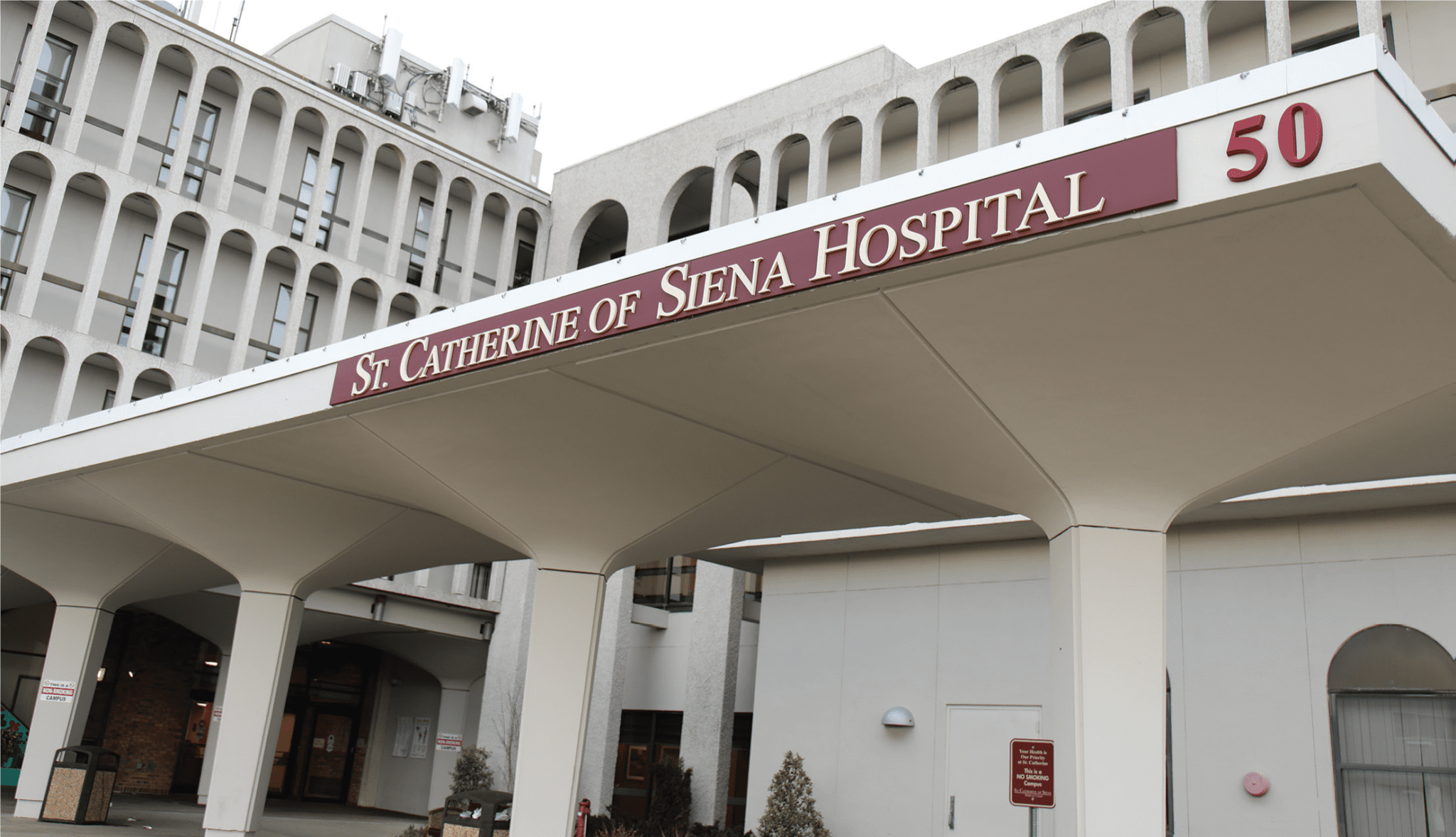 “When you get to the situation where you’re bargaining for someone’s pension, or someone’s salary, or somebody’s hospitalization, you get a different perspective the older you get,” said Katala. “So, it’s always good to have a young person’s perspective about the bargaining unit. I think cultivating younger people definitely helps the entire organization. It is a younger person’s job because physically it’s very demanding.”

As one of the new generation of leaders, Vivian Bermudez soon plans to visit the Winpisinger Center for training.

“I’m the type of person that doesn’t like to do things halfway,” said Bermudez. “If I’m making a commitment to do something, I’m going to do it to the best of my abilities. I am looking forward to all these classes and all these things that I could learn. Janine says something that I repeat all the time. ‘Knowledge is power.’ I believe that 100 percent, especially for the underdog, which I am.”

Thelen has attended all three leadership classes the center offers.

“There’s no other union that I know of that has such an educational center,” said Thelen. “There’s a whole litany of courses that I still want to take. The other unions here at the hospital, they don’t have anything like that. The management in most buildings have less education than we are afforded at Winpisinger.”

Empowering local leaders and staff throughout the union is a vital part of the IAM’s new organizing strategy, which includes the Healthcare Department.

“I think our territory organizing leaders are excited about this new resource, and how we are being smart and strategic about our entry into this sector,” said Garza. “We’re already in a lot of places, and we have some kind of healthcare unit in each of our territories.”

Opportunities exist throughout North America to both grow the IAM and to improve the lives of the people who take care of us and our loved ones.

In an industry that often intimidates and divides its workforce, an IAM contract allows these healthcare professionals to confidently stand together.

“The power of positivity goes on and on, just having somebody you can depend on,” said Thelen. “You can always make a phone call and a Brother or Sister will be there in a second’s notice, because we’re getting gobbled up by corporate greed and the little guy needs to be represented. No matter what language you speak, no matter what color your skin is, you need to be represented. And in my opinion, only a union is going to do that.”