The Military Family Life Counselor (MFLC) movement received a huge boost with the announcement of the support of U.S. Rep. Joaquin Castro. The Congressman, a member of the U.S. House Labor Committee, has shown his support for strong labor unions on many fronts. Building upon prior work with labor, he is now calling for a congressional inquiry into the Military Family Life Counseling Program.

One of the concerns expressed in the Congressman’s formal inquiry letter to the Department of Defense is a question regarding why the MFLCs are enduring substantial pay cuts that negatively affect recruitment and retention of counselors, despite substantial earmarked funds allocated to the MFLC program. Furthermore, the vacancies generated by decreased wages are a direct result of huge workloads that diminish the ability of MFLCs to deliver the highest level of service to our heroes. Even more alarming is the fact that 900 military members are scheduled to come home beginning this December.

Castro’s support and allegiance to the MFLC movement comes at a key moment. With rising suicide rates, PTSD, and substance abuse plaguing our service members, it is obvious that congressional and national action is long overdue. The MFLCs continue their effort to reach out to the public and to politicians to gain support for the IAM’s organizing campaign.

They aim to stabilize their workplace and stop the huge turnover by improving pay, benefits and working conditions in order to achieve their ultimate goal of assisting our armed forces members with the rigors of service and to curb the challenges our service members face when returning home from hostile environments.

“To date, we have organized about 300 MFLCs and are in the process of negotiating strong first contracts,” said IAM Western Territory General Vice President Gary R. Allen. “We invite the support of the Congressman and urge all elected officials to join us in aiding the MFLCs in our fight to end the scourges facing our valiant troops.”

“We are honored that Rep. Castro has offered his assistance to us in our struggle to obtain for all workers, wages, benefits and working conditions that enable them to not only survive, but to thrive,” said IAM Healthcare Director Martí Garza. 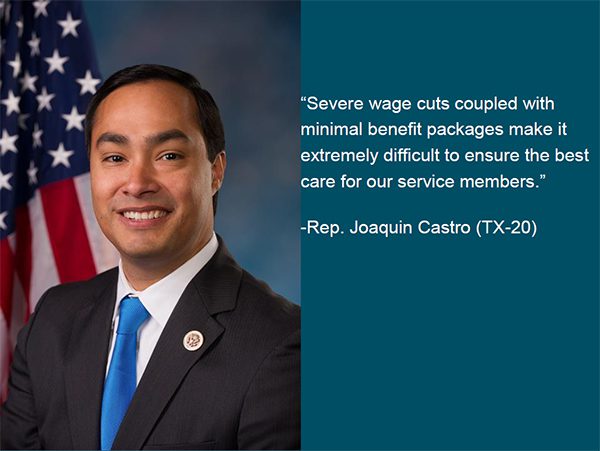